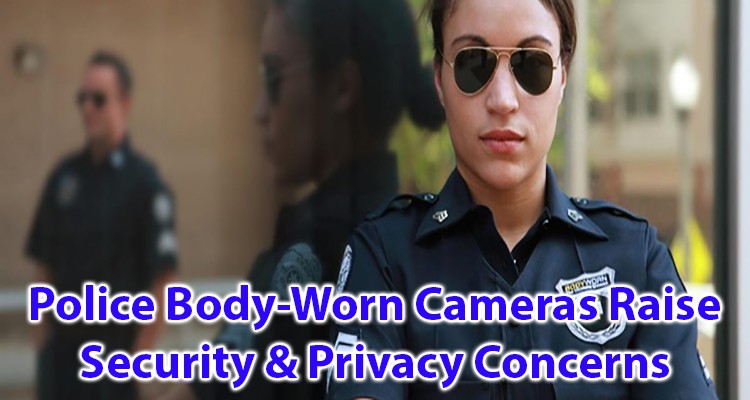 On one hand, Body-worn cameras have brought transparency in law enforcement and on the other hand, these have raised security and privacy concerns. Advocates of transparency in law enforcement are keen enough to see more police officers wearing body cameras. Police officers wearing body cameras take part to a decline in police use of force incidents; video recording from police cameras has furnished useful proofs to those investigating allegations of police misbehavior. Along with the benefits of police body cameras, there are serious issues. There is a big need for resolving privacy and security concerns because these are becoming common day by day.

According to a report of Sky, the United Kingdom Police are using a body-worn camera from company Evidence.com. This company uploads the footage on the internet automatically. The company is supplementary of TASER which produces renowned electric shock devices. A representative of the company says that security and safety of the footage are under consideration, with shadow Labor minister for policing, Jack Dromey, asking for assurances from the Home Secretary. The central point of the criticism is Evidence.com use third party cloud computing named as Amazon Web Services. This opens a new debate about the location of the footage and the possibility that employees of the companies involved could be accessing private information. Evidence.com seems to take some reasonable basic safety measures, looking at their stated security practices. Encryption is predominantly significant in cloud computing, and not just owing to concerns about access. The same types of machinery that give resilience against data loss-e.g. various copies combined with the development of more constant data storage technologies-make it very hard to make sure that data is ever fully deleted.

Maybe the other noticeable privacy concerns are those of the civilians filmed by police officers. If we consider footage from police body cameras public record then hours of footage of innocent people’s interactions with police officers is potentially available. It is not hard to envisage a state of affairs in which police officers wearing body cameras go in someone’s home and leave without making an arrest. Footage of that encounter could expose humiliating or private information about the homeowner.

Last year in November a report came that Washington Police department was reviewing their policies concerning dash cameras and body cameras in the wake of accumulation in requests for video from the public through public record requests. In Washington and many other states of the United States of America, the public consider body camera recording at risk to release upon request.

Members of the North Dakota House unanimously passed a bill that would exempt police body camera video recording of the inside of a private site from public record request. Member of North Dakota House Kim Koppelman introduced the bill and said that the legislation would protect civilians in situations the same as the one I mentioned above. According to the report, Mr. Koppelman introduced the bill at the request of West Fargo Police Chief Michael Reitan. Reitan and Koppelman had primarily concerns with the privacy of civilians, but a civilian could have a genuine interest in seeing the video recording made by police officers in her home, particularly if she believed that officers harmed the property or misbehaved.

Conor Friedersdorf wrote a policy framework for body cameras in The Atlantic.

Members of the public who appear in body camera video recording can request that it be sealed in many cases—if they are a witness or a crime victim, for instance—but if no civilian in a video recording, then any member of the press or public can at least watch it.

He said that he would extend certain cases to include incidents involving police officers capturing the interior of private property. Mother Jones’ Kevin Drum recommended that different police body camera policies be in place for video recording captured in public and for footage captured inside private property. Whatever body camera policies police departments and policymakers implement, they must be clear about when a video recording of the inside of private property will be available to the public. This is especially significant because, as Friedersdorf underlines in his article, police departments are oftentimes unwilling to discharge their body camera footage disclosure policy (if they have one in any way).

When a police officer should switch on his body-worn camera? Jay Stanley at the ACLU has proposed policy regarding it. A police officer should switch on his or her body-worn camera at the time of initiation of any other law enforcement or investigative encounter between a police officer and member of the public or when responding to a call for service. That would include consensual interviews and searches, arrest searches, frisks, stops, enforcement actions of all kinds and any encounter that becomes in a way intimidating.

This is an admirable proposal, although it doesn’t address what ought to be done if such a strategy is in action and an officer does not have his body camera on during an encounter. However, Stanley wrote that if a police department has a strategy in action demanding that officers have body cameras should be dealt with in the following way:

And this requirement [to turn on body cameras during interactions with the public] must have some teeth associated with it — not only a risk of disciplinary act but also possibly an exclusionary regulation for any proof obtained in an unrecorded encounter (for police who have been issued the cameras, unless there is an exigency to justify the failure to record). Another means of enforcement might be to require that in any instance in which an officer wearing a camera is accused of misconduct, a failure to record that incident would create an evidentiary presumption against the officer.

These potential consequences may be enough to encourage officers to habitually turn on body cameras during encounters with the public, although it shouldn’t be surprising if there are genuine instances of police officers forgetting to turn body cameras on, particularly as they are introduced into departments. With something like Stanley’s exclusionary rule being strictly interpreted police officers will have to become used to regularly turning body cameras on in cases when doing so might be awkward or encumbering, such as during an unexpected on-foot pursuit of a suspect.

Some might object that to get around the problem of officers not turning their body cameras on at suitable times that cameras should be continually on during an officer’s shift. This is technologically possible. During the first randomized control test on the outcome of police body cameras, which occurred in Rialto, California, cameras with a battery life of at any rate 12 hours were used, although officers participating in the experiment were not required to have cameras on at all times.

Technically, officers with body cameras can have the devices on during a shift; there are serious problems with this requirement.

First, police officers are worthy of some privacy whereas on the job. The public should hold police officers to high standards and imagine honesty and transparency from law enforcement officials, but it remains the case that police officers ought to be able to talk to each other in police cars about department chitchat and other topics without terror that members of the public may request a video recording of the conversation.

Second, sometimes police officers have to interrelate with informers and minors who are the victims of sexual assault. It would not be suitable for such interactions to be filmed by officers. Certainly, during the Rialto experiment officers were asked not to have their body cameras on during such encounters.

There is a possibility that police departments will issue a big number of body-worn cameras to their officers. Nonetheless, the issuing of these cameras must be together with well-considered body camera policies that take into account the privacy concerns of civilians and police officers and the effect of body cameras may have on law enforcement officials doing their jobs. Police body camera policies must also take notice of local policing needs and should be shaped in the labs of democracy.

Here we close our discussion on the endnote that the use of police body-worn cameras is a serious matter. It could have some optimistic effects from a civil liberties scenario. Repeated recording would mean that all of a police officer’s daily activities would be recorded and they would be fully answerable for their actions. But it would also mean that many members of the public, who have no concern with crimes, would be recorded in film and this would be a needless interruption on their privacy. Body-worn cameras raise privacy and security concerns of the people who are not the participants of the crime but they come into the notice of law enforcement agencies and sometimes they take pain without any reason. So, the privacy of such people should be protected.