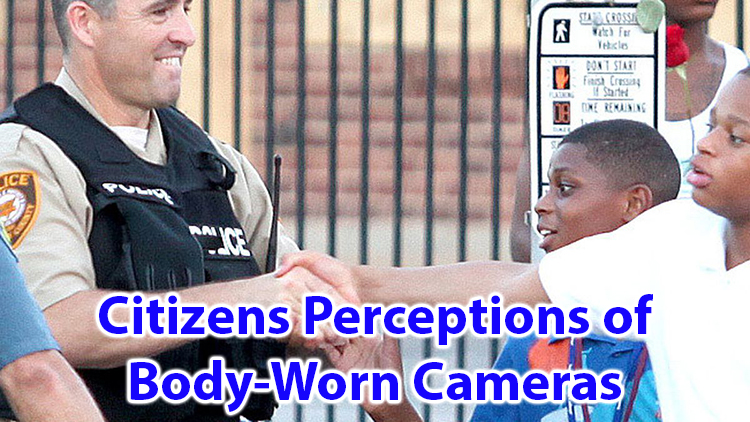 Body worn cameras have been a hot topic as their deployment was seen in The United States of America and UK in the last few years. Many people have questioned its role in aiding law enforcement. Well, there is no doubt that these cams have helped decrease the crime rate. But what do people think of these cams and what are their perceptions about them is also a question to ponder. This article will cover a detail note on what are the citizen’s perceptions regarding body-worn cameras.

Body-worn cameras (hereafter BWCs) are used to capture audio and video recordings of encounters between police and citizens. In recent years, BWCs have been deployed by police agencies in many countries including such as the United States, Australia, and European countries. BWCs are mainly used to prevent police discriminatory behaviors and violent encounters (i.e., tragic police shooting of citizens), promotes the quality of interactions between police and citizens, and enhance citizens’ trust with police.

Civilizing effect was observed among the public. Studies show that people are less likely to flee knowing that they are being taped. The behavior of individuals had a significant change towards police after the deployment of BWCs. There was a really remarkable drop in complaints against officers who were wearing cameras. We’re talking on the order of 88 or 90 percent. officers are less likely to engage in rude or inappropriate behavior, and citizens are less likely to be aggressive and resistant. That is truly remarkable.

A significant gain of trust in police was observed during recent years. As the police officers are being monitored, people feel safe around police. The cases of police misconduct have decreased abundantly. Body worn cameras have played a major role in building a better law and order environment around us.

As police officers are being monitored continuously, bribe and other forms of corruption in police department has decreased evidently. Public find it a relief as they can get their issues resolved without spending their hard-earned money as bribe.

These things are a strong evidence that the public are in favor of these gadgets as they ensure their safety of health and money as well. A detailed analysis of citizen’s perception regarding body worn cameras was given by Michael D. White, Natalie Todak, Janne E. Gaub.

The purpose of this paper was to assess perceptions of body-worn cameras (BWCs) among citizens who had BWC-recorded police encounters, and to explore the potential for a civilizing effect on citizen behavior. From June to November 2015, the authors conducted telephone interviews with 249 citizens in Spokane (WA) who had a recent BWC-recorded police encounter. Respondents were satisfied with how they were treated during the police encounter and, overall, had positive attitudes about BWCs. However, only 28 percent of respondents were actually aware of the BWC during their own encounter. The authors also found little evidence of a civilizing effect but did document a significant, positive connection between awareness of the BWC and enhanced perceptions of procedural justice.

It is seen that citizens have been more amenable to officer’s commands during encounters. Citizens often change their behavior when they know that they are being recorded. It aids law enforcement in such a way that low-level encounters are settled easily rather than escalating to a kind where the use of force becomes necessary.

After all, we know that other cameras do change behavior. Public closed-circuit TV cameras seem to lead to a moderate decrease in crime, particularly in parking garages. Traffic cameras significantly decrease speeding and fatal accidents.

Even the suggestion that someone is watching us tends to influence us. In 2011, researchers at Newcastle University in England posted pictures of a pair of male eyes and the caption,

“Cycle Thieves: We Are Watching You.”

Bike thefts decreased by 62 percent in those locations — and not elsewhere.

Evidently, there are times when citizens have an expectation of privacy that could potentially be violated by a police officer’s use of a body-worn camera — the interview of a child, the interview of a sexual assault victim, for example. … Perhaps a police officer is talking to a confidential informant or someone else trying to get intelligence on criminal activity. When that encounter is recorded, it becomes, in many places, a public document that can be requested by citizens, by press and certainly by prosecutors.

It’s clear that police officers and police unions have not universally embraced this technology. They have concerns about when cameras will be on and off, when supervisors can go and review footage. And then, perhaps most importantly, how are you going to store the tremendous amount of video data that’s generated by officers wearing these cameras?

There is always been a debate about when the cameras should turn on or when should they be off. What kind of data should they gather and what kind of data should they save? These questions are the real deal, the privacy of citizens should not be violated meanwhile every encounter should be recorded. Who can have access to those recordings? Can prosecutor use that evidence in court? Well, the answer to all these haven’t been answered yet. The law enforcement executives are currently working on this to devise a protocol that is well suited for everybody. Some of the standards that are currently being followed are as follow:

No matter, what standard or policy is devised for the use of body worn cameras, one thing the law enforcement agencies should follow is that the privacy of public should not be violated. All the things said in confidence should remain confidential. We hope that these devices aid our local police and other national agencies to build a world with as less criminal rate as possible.